With every fall comes the beginning of a great celebration in the US, the NFL and the playoffs of the MLS soccer season. Around the globe, this involves group stage play in the European Champions League tournament, alongside early-season soccer matches in the Premier League (UK). While the options for betting online are always interesting, if you’re looking for something else to amuse yourself with, below you can find some interesting football-related patents, as well as patent applications that have been published or issued.

Patents from the Good Old Days

Dating back to 1942, this patent introduced wearing head protection created from a new mould to withstand the blows involving the tough sport of American football. It all started in 1893, when the first leather head protection was used by football players during the annual Army-Navy game. Although they were popular until around 1940, it became clear that if a player took a blow to the head, he would run increased risk of serious injury. Besides, leather helmets were hot and affected players’ hearing ability. John T. Riddell changed all that with his plastic helmet patent. Although some imperfections caused it to be banned in the NFL (leather helmets were easily breakable), the improvements that followed led to its official use in the NLF about a decade later. 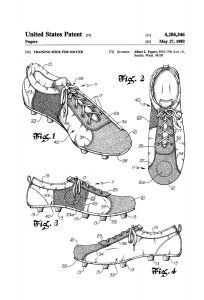 A patent that changed the game of soccer came from Charles Goodyear in 1844. His idea was to make vulcanised rubber and put it to any possible use, from making tires to soccer balls. At the time, soccer balls were kept inflated with the help of a pig’s bladder, whose normal irregularities affected the performance of the ball. Thanks to the vulcanising process that Goodyear had thought of, rubber was stretched under heat during manufacturing without softening or otherwise affecting the finished product. This resulted in soccer balls that had perfectly spherical bladders.

1.     American-Style Football with an Electronic Circuit

Inspired by Wilson Sporting Goods Co., this patent was for an American-style football that included an inflatable bladder and an electronic circuit within it to help monitor the movement, rotation, deceleration, acceleration, speed, and position of the football during play. Among others, this invention aimed to provide extra information during a football game and help a camera’s view or the view of officials in case it was obstructed.

A patent that comes from NIKE, Inc. and has to do with  a football whose performance would be improved with enhanced manufacturing methods and the use of aerodynamic laces. NIKE claimed that previous patents and applications related to the geometry of laces did not explore the effect of laces on the football’s aerodynamics.

A patent was issued to an individual from Denver who came up with the idea of a football training aid that would be equipped with a variant speed setting control mechanism which would be activated during practice. The whole point was to create dynamic inertia to make the ball difficult to handle and hold and help boost muscle memory and grip strength in the hands of the player.